How do I configure SQL Server Express to allow remote tcp/ip connections on port 1433?

7) Scroll down to IPAll make sure TCP Dynamic Ports is blank and that TCP Port is set to 1433.

support.webecs.com
Posted by Nguyên Ngô Sinh at 8:19 PM No comments:

There are lots of troubleshooting articles about how to diagnose connectivity problems when setting up database mirroring, especially errors such as these:
Msg 1418, Level 16, State 1, Line 2
The server network address "tcp://mirrortest.com:5023" can not be reached or does not exist. Check the network address name and that the ports for the local and remote endpoints are operational.
or
Msg 1456, Level 16, State 3, Line 1
The ALTER DATABASE command could not be sent to the remote server instance
but here's something a little different.
Imagine that you have a server which is not connected to a domain. It might just be a standalone machine, it could be a virtual machine that you've just built. I've done this a few times in virtual environments to do demos on laptops and the like. It's a not a production scenario that you'd come across really, but it works really well in test.
The questions that usually come up are how can I configure the partners (and endpoints) without having a FQDN, since I'm not connected to a domain, I'm just in "WORKGROUP". SQL Server still wants you to use FQDN formatting for the partner addresses. When you're trying to configure it, you might have even encountered an error like this when trying to start mirroring (depending on exactly how you did the setup)
Database Mirroring login attempt failed with error: 'Connection handshake failed.
There is no compatible authentication protocol. State 21
What you need to do to be able to set this up is as follows:
1. adding "local" as the primary DNS suffix as in detailed this article here (ok it's about exchange server but it works the same)
http://technet.microsoft.com/en-us/library/aa997119.aspx
(remember to reboot)
2. You can now specify FQDN formatted names for the local machine in the format:
For the principal:
TCP://MIRRORTEST.LOCAL:5022
For the mirror
TCP://MIRRORTEST.LOCAL:5023
(Or other port numbers of your choice, but remember that they'll need to be different)
3. You'll need these ports as exceptions in Windows Firewall if you're running it (I was even though it was a local machine!)
4. My endpoints are setup like this (but I just did them through the GUI) there's nothing exceptional here:
CREATE ENDPOINT [Mirroring]

You can now run some cool tests and demos without ever being connected to a network.
Posted by Nguyên Ngô Sinh at 10:47 PM 1 comment:

To create a database for database mirroring

Before you can start a database mirroring session, you must create the mirror database. You should do this just before starting the mirroring session.
This example uses the AdventureWorks sample database, which uses the simple recovery model by default.
For a complete example of setting up database mirroring, showing security setup, preparing the mirror database, setting up the partners, and adding a witness, see Setting Up Database Mirroring.
Posted by Nguyên Ngô Sinh at 10:06 PM No comments:

Installing an Edge Transport server in an Exchange Server 2007 environment is pretty straightforward: 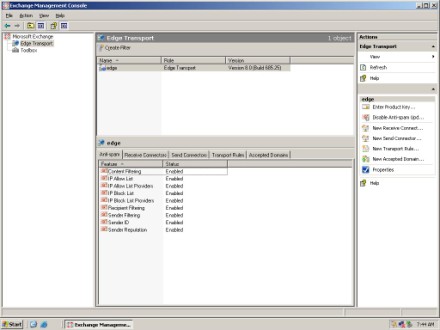 Notice that the bottom portion of the details pane contains a series of tabs. The Antispam tab is selected by default; it allows you to create several different types of spam filters.
Content filtering
One of the most useful spam filters is the Content filter. Its job is to use a mathematical algorithm to determine the probability of an email message being spam, and then filter it accordingly. The content filter uses the same Spam Confidence Level (SCL) ratings as Microsoft Outlook.
You can access the content filter by right clicking on Content Filtering and selecting Properties. The properties sheet contains three tabs that are worth paying attention to: Custom Words, Exceptions, and Action.
Figure E: You can set the threshold at which a message should be filtered. 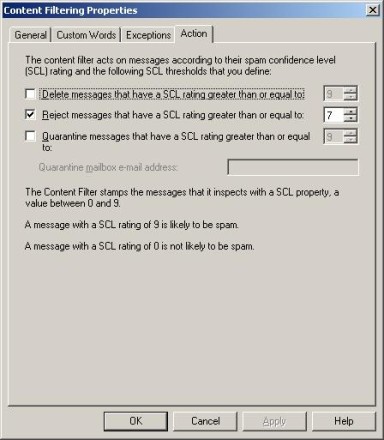 It is usually best to initially configure an Edge Transport server to provide minimal filtering and then gradually increase the aggressiveness of the filtering over time as you begin to understand the impact of the various filters.
Initially, I recommend only filtering messages with an SCL rating of 8 or higher. I tend to be a little bit conservative though. The default settings have a more aggressive SCL rating of 7 or higher.
IP filtering
Edge Transport server also filter spam by looking at the sender's IP address. There are four different filters that are designed to filter messages based on IP address: IP Allow List, IP Allow List Providers, IP Block List, and IP Block List Providers
Recipient filtering
Recipient filtering blocks email messages sent to specific recipients. This is useful if you have Exchange Server mailboxes that should never receive email from the outside world. You can use recipient filtering to prevent email messages from being sent to individual mailboxes or to entire domains.
As you can see in Figure F, the Recipient Filtering properties sheet also allows you to block any email message sent to a recipient who is not listed in the Exchange Global Address List.
Figure F: You can block messages sent to specific mailboxes or domains. 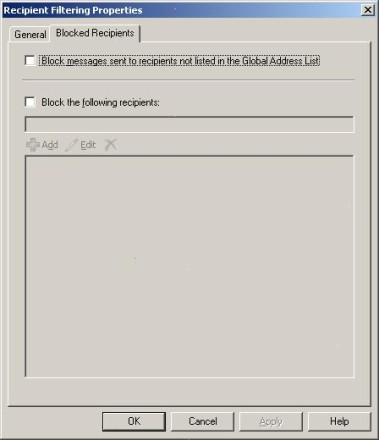 Sender filtering
Sender filtering works by allowing you to filter email messages from specific senders. This filter is very flexible in that it allows you to enter individual email addresses, entire domains, or even whole domain ranges. This means that you could block a specific domain, such as Contoso.com, or you could block all domains within a specific domain hierarchy, such as .com or .net.
The Sender Filtering properties sheet contains an Action tab that lets you control what happens when a blocked sender sends an email message to your Exchange Server organization. By default, the message is rejected, but you have the option of stamping the message with a Blocked Sender stamp and processing the message any way.
Sender ID filtering
Sender ID filtering is designed to prevent domain spoofing techniques that are commonly used by spammers and in phishing scams. Sender ID works by comparing the IP address from which a message has originated against a list of the IP addresses of mail servers that the domain's owner has authorized to send email on behalf of the domain.
By default, the Edge Transport server is configured to stamp messages with the Sender ID result and then continue processing the email. The reason for this is that, although Sender ID screening is an effective antispam technique, Sender ID technology has yet to be widely adopted. Many senders have not yet registered their mail server addresses.
Sender Reputation filtering
The Sender Reputation filter is one of the more interesting filters. It can collect information about recent email messages received from individual senders and domains. If the sender or the domain has been a source for spam, then the sender's reputation is decreased.
In addition to message history, a sender's reputation is also based on whether or not the sender's mail server is configured as an open proxy. When a message is received from a sender, Exchange Server uses the sender's SMTP address to perform a test against the sender's mail server to determine whether or not it is configured as an open proxy, as shown in Figure G. If the server is an open proxy, the sender's reputation is decreased.
Figure G: You can see if a sender's mail server is configured as an open proxy. 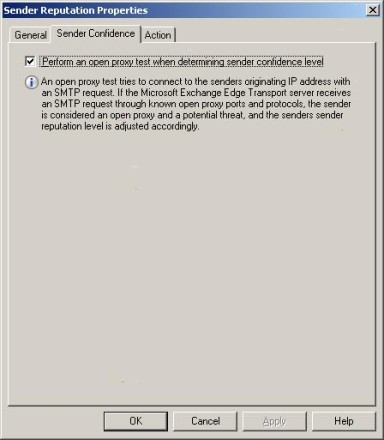 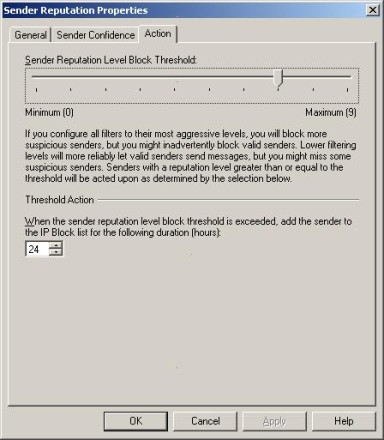 In Step 4, I showed you some basic techniques for configuring an Edge Transport server to filter out spam, viruses and malware. Now let's review some more advanced content-filtering features.


Posted by Nguyên Ngô Sinh at 7:28 PM No comments: