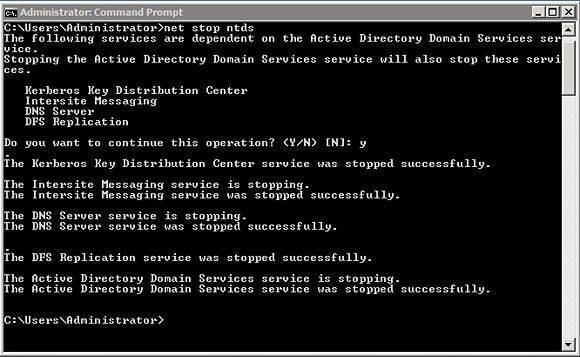 Kerberos Key Distribution Center
Intersite Messaging
DNS Server
DFS Replication
Once the Active Directory Domain Services have been stopped, you can restore a System State backup. When the restoration process completes, you will likely be prompted to reboot your server. You should avoid rebooting because doing so will cause the Active Directory Domain Services to be restarted, which will cause your restoration to be overwritten.
Performing an authoritative restore
Before the server is rebooted, we need to tell Windows which Active Directory object needs to be restored authoritatively. This can be accomplished by using the NTDSUTIL utility. You can begin the process by entering the following commands:
Ntdsutil
Activate Instance NTDS
Authoritative Restore
Although not technically required, I recommend entering the LIST NC CRs command at this point. This command will list the various Active Directory partitions and their cross references. It allows you to validate that you are about to perform an authoritative restore within the correct Active Directory partition, as shown in Figure B. 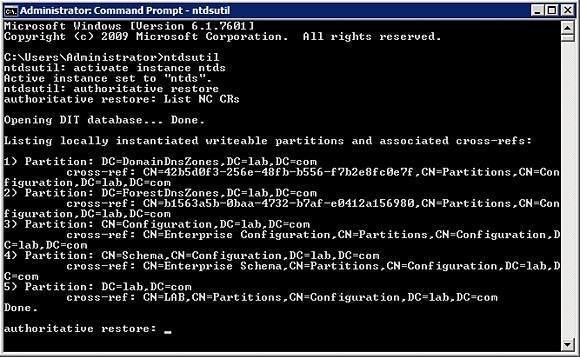 Now it’s time to specify the object that needs to be restored. You can do so by using the Restore Object command. For example, suppose that you wanted to restore a user account named User1 that existed in the Users container in a domain named Contoso.com. To perform such a restoration, you would use the following command:
Restore Object “CN=User1,CN=Users,DC=Contoso,DC=com”
Wrapping it up
Now that you have marked the object that needs to be restored, the only thing that is left do is to restart the Active Directory Domain Services. This can be accomplished by entering the following command:
Net Start NTDS
When the Active Directory Domain Services start, the object that you restore will be replicated to the other domain controllers in the domain.
About the author: Brien M. Posey, MCSE, has previously received Microsoft's MVP award for Exchange Server, Windows Server and Internet Information Server (IIS). Brien has served as CIO for a nationwide chain of hospitals and has been responsible for the Department of Information Management at Fort Knox. You can visit Brien's personal website at www.brienposey.com.
Posted by Nguyên Ngô Sinh at 9:11 AM