Where Part 1 left off was just shy of deploying the Standard Edition server itself as most of the back-end configuration was completed.  A few additional steps will be left for later discussion (e.g. client Automatic Configuration DNS records) when those topics are addressed.  So for now left’s get the Lync Server deployed an functional.
Update:  This process is identical to (and has been tested with) the public release version of Lync Server 2010.

What these steps do is install a second SQL Express named instance (this one being named RTCLOCAL) on the local server which will contain a replica of the existing RTC named instance.  Although it may initially seem inefficient to have two SQL instances with duplicate data on the same server the separation of the Central Management Store and a CMS replica is key to how multiple server’s function in a single organization.
Only the first Standard Edition server in the organization would contain this authoritative RTC instance, while all other Lync Front End Servers (and even Edge Servers) would contain their own RTCLOCAL instance to replicate the Central Management Store data.  This approach also allows for the  new redundancy and availability features which were lacking in previous versions of OCS.  This RTCLOCAL instance can only ever be stored in an automatically installed SQL Express instance, it is not supported to locate this data in a full SQL Server instance.

Checking prerequisite Wmf2008R2…installing…failure code 3010
The server must be restarted before installation can continue. To continue the installation after the server has restarted, start the Deployment Wizard and complete this step again. 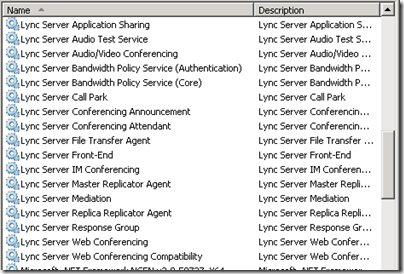 So about now would be a good time to briefly sidebar and try to understand what is going on with all these different SQL instances and databases with similar names. I was scratching my head as well the first time I installed all this in an early beta release.  So basically here is a brief rundown of 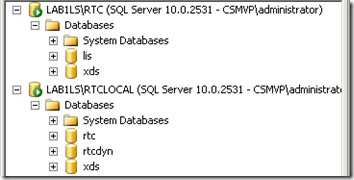 And now moving back into the server deployment the next pending step is to request and assign a certificate so that the services can be started.


Let us briefly take a look at another major difference between OCS and Lync which is how IIS is configured by the installation process. 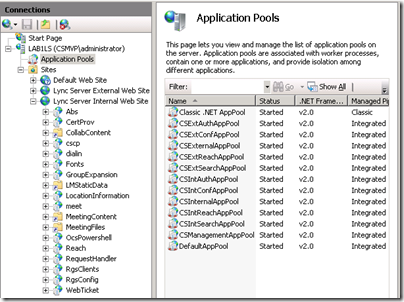 Because there was no step in the deployment asking for additional IP addresses and it is still a best practice to use a single IP address on the Standard Edition server the External and Internal web sites in IIS are clearly not configured on the same listening ports.

Before enabling user accounts now would be a good time to add the required internal DNS records to support Automatic Configuration. This is allow for any AD Integrated replication to fully propagate the new DNS records before attempting to sign-in with the Lync client. 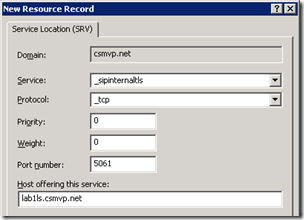 As a general best practice I always prefer to add a second DNS record which the client will use as a fallback during Automatic Configuration in the case that the SRV record is not available or unsupported.  The Communicator and Lync clients will automatically lookup sipinternal, sip, and sipexternal host records in the SIP domain if the SRV lookup first fails. 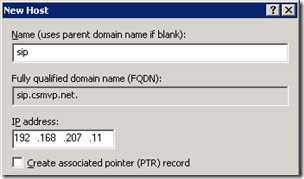 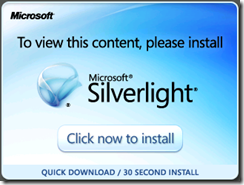 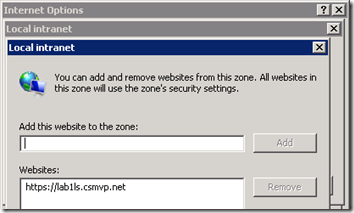 At this point we should have a fully functional Lync Server and are ready to start configuring accounts, policies, and additional services.  Part 3 in this series moves on to enable a few user accounts for Lync Server to test client connections to the Front End server.