Now that the general public has access to the Release Candidate software for Lync Server 2010 it is now appropriate to cover the deployment process in depth. The purpose of this article is to take a look at what the installation process actually does in order to generate a deeper understanding of the product. Not just simply follow a bunch of screenshots of the deployment wizard.

I’m starting with the Standard Edition as this is both the simpler approach and the more common deployment for testing purposes.  A host of new features and concepts have been introduced which are all available in single-server Standard Edition pool, not to mention that the required amount of individual physical hosts have been reduced thanks to improved collocation support.  So a single Windows Server can now fill the role of both a consolidated Standard Edition server and a Mediation server.  Additional roles like the Monitoring Server can also be collocated with the Standard Edition server, but a full SQL Server installation must be performed on the server prior to deploying Lync Server on it.  Previous versions of OCS Standard Edition did not support this level of co-mingling, or support anything but the default SQL Express instance.
For the purposes of this walkthrough I will start to introduce a number of PowerShell cmdlets in some of the processes, but understanding that PowerShell may still be new to many people I will utilize the deployment wizard throughout the majority of the steps.  Later on I plan to document a complete Lync Server deployment using PowerShell cmdlets at every possible step.
Much of this process is already detailed in Microsoft’s official Lync Server 2010 (RC) Lab Deployment Guide but I’ve gone into further details on many of the steps, as well as mixed up some of the order as a few of the prerequisite steps are redundant.  That document also includes configuration and deployment steps for a Director and Edge Server which I will not cover now, but will address in later articles.
Update:  This process is identical to (and has been tested with) the public release version of Lync Server 2010.

Before we can run any of the AD preparation steps included in the deployment wizard a few server prerequisites must first be installed.  The various IIS features are not required until just prior to deploying the Lync Server components but for simplicities sake installing all features in one step is best.

In previous beta builds a number of prerequisite supporting installations had to be manually deployed, but in the Release Candidate we see our first glimpse of how the upcoming RTM product will smoothly handle all of these for us.
This process will install the SQL 2008 Native Client and SQL Server 2008 Express, as well as configure firewall exceptions for SQL. Mostly importantly it also deploys the first SQL Express named instance, simply called RTC.  This instance will be the default location for the Central Management Store which is where Lync will store the majority of the global (forest-wide) configuration data.  The RTC Service container in the AD Configuration partition is still used to store some data, but mainly for coexistence with previous versions of OCS. 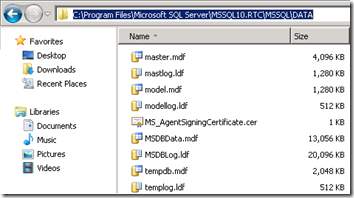 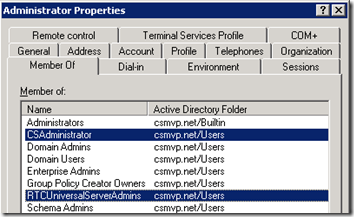 The final preparation step is to manually create a file share on the server which will later be referenced during the Lync Server topology configuration. 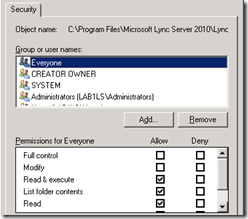 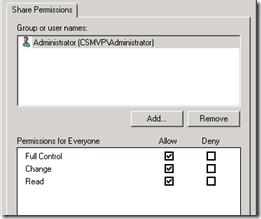 Because the Lab Deployment Guide uses the Planning Tool and this is not required I will instead walkthrough the basic Topology Builder process.

At this point it is now time to publish the topology which will populate the RTC instance with new databases, create the folder structure in the shared directory, and publish configuration settings into the CMS and Active Directory.

As indicated by the To-Do List shown under Next Steps a couple of DNS records will need to be manually created to match the FQDN set in the Lync Server topology.

To validate and understand the changes the Topology Builder has applied to Active Directory there are a number of places to look throughout the various results logs, within Active Directory, and the SQL databases themselves.

At this point all organization preparation steps have been completed and the next step is to actually install the Standard Edition server components
.
The next article in this series jumps right into that process with Part 2.